No Double Chin. No Surgery.
No Kidding.

KYBELLA® is a prescription medicine used in adults to improve the appearance and profile of moderate to severe fat below the chin (submental fat), also called “double chin.”

Submental fullness, sometimes referred to as “double chin”, is a common yet undertreated facial aesthetic condition. It can impact a broad range of adults, including both men and women, and can be influenced by several factors such as aging, genetics and weight gain, and is often resistant to diet and exercise alone.1

If you’re bothered by submental fullness, you’re not alone. According to a 2015 survey conducted by the American Society for Dermatologic Surgery (ASDS):2

Results are represented over the course of treatment; not all treatments are shown. Up to 6 treatments may be administered, spaced no less than 1 month apart. In clinical trials, 59% of people treated with KYBELLA® received all 6 treatments.

Are you ready for a face to face consultation?

We offer Kybella treatments by our celebrated injectors at both our Glendale and Los Angeles (Little Tokyo) Spa locations. 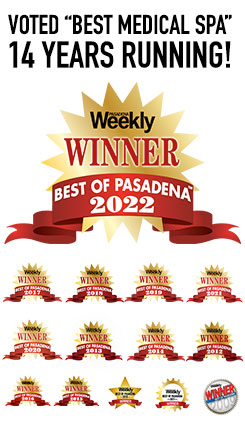